What Happens When Acid Rain Falls On The Environment

Regular rain isn’t normally dangerous and can provide some benefits to the environment. However, when rain becomes acid rain, problems arise. Also called acid precipitation, acid rain is considered a type of pollution and has been known to cause damage to plants, animals, and buildings. 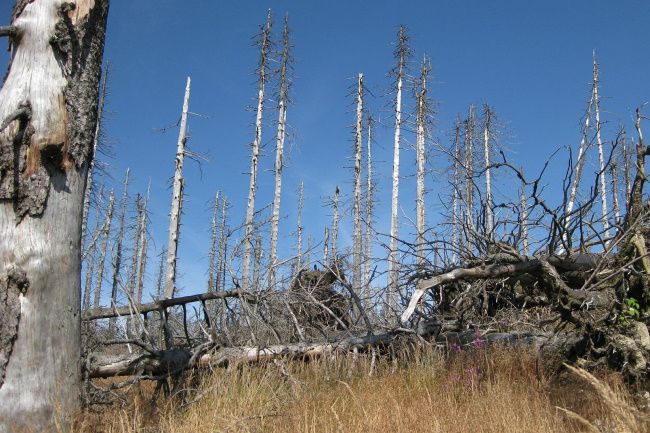 Acid Rain Is Bad News For Our Environment

We all know that acid rain is bad news for our environment, and it poses a large threat to human health too. It occurs when rainfall, snowfall or fog picks up pollutants such as sulphur dioxide and nitrogen oxides in the atmosphere.

Acid rain can cause damage to trees, lakes and buildings and affected areas may be unusable for a long time.

The primary causes of acid rain are industrial activities such as burning fossil fuels (coal) in power plants and factories. Improper disposal of waste by industries also contributes to this environmental issue.

Acid rain has been linked to several diseases in humans including asthma and bronchitis among others. It is also one of the causes of environmental degradation worldwide.

Effects On Buildings And Structures

If you live in an area with coal-burning power plants, you’ve probably seen the grey deposits of sulphur and nitrogen on the buildings and houses near them.

Acid rain is made when the rain reacts with gases from the coal that are sent up into the air. The gases mix with water vapour, oxygen, and nitrogen to make what we call acid rain or acid washing.

Acid rain eats away at building materials such as concrete, marble, limestone and statues made from these materials. The chemicals in the acid react with these materials, causing them to break down over time.

The chemicals in the acid can corrode metals like copper, aluminium, and bronze. This causes metal parts like roofs and gutters to rust prematurely when exposed to acid rain.

The chemicals in the acid also cause paint to peel off buildings if they are exposed for long periods.

If you’ve ever visited the lake, you may have noticed that there are a lot of different life forms that live in it. But what you might not have known is that all these life forms — the duckweed, plant plankton, snail darters, and all the rest — are what help make the lake such a beautiful place to spend time with family and friends.

And while, yes, that’s quite pleasant to think about, these organisms in the lake also help sustain its ecosystem by providing food for the fish who live in it.

That is, until acid rain washes those organisms out of the water, along with valuable minerals needed for those organisms’ growth and health — thus killing off the fish who rely on it for survival.

Acid rain is a direct result of human activity. It’s caused by the release of sulphur dioxide and nitrogen oxides into the atmosphere, which combines with water vapour to form sulfuric and nitric acid.

Acid rain can affect both plant and animal life, but it’s especially harmful to fish because their bodies are particularly sensitive to changes in pH levels.

When acid rain falls into lakes and ponds, it lowers their pH levels, which makes it harder for fish to build shells or skeletons. That’s bad news for young fish who need calcium carbonate for developing bones. And also, some older fish may rely on their skeletons as protection from predators.

It Can Have A Big Impact On Agriculture

Did you know that acid rain can have a significant impact on agriculture? Did you know that by 2050 we’ll likely see a 200% increase in the amount of acidity from rain downwind of coal-fired power plants?

Acid rain occurs when sulphur dioxide (SO2) and nitrogen oxides (NOx) react with moisture in the air. The main reason these compounds are released into the atmosphere is due to coal combustion in power plants.

Unfortunately, acid rain can have very harmful effects on crops as well as food products. Some crops are worse off than others, as some have stronger stomatal control of gas exchange than others.

This process works fine in most cases, but when there is too much acid in the air, a lot of it can dissolve in water droplets, forming carbonic acid. Carbonic acid then harms the stomata by making it difficult for them to open and close properly.

It Also Damages The Protective Surface On Leaves

Acidic rain may cause discolouration of leaves, as well as kill them. In addition, it can damage tree bark and make it more susceptible to disease. Acidic rain also damages the protective surface of leaves.

The damage is caused by acid absorbing through the leaf’s waxy layer. This results in a whole host of problems. For example, the leaf’s photosynthesis is disrupted by this damage.

The plant reacts by producing more waxes to protect itself from further damage. This means that leaves become covered in a layer of wax which makes them look dull and lifeless.

If the problem persists, then the leaves will begin to turn brown and die off completely. As this happens, fewer leaves will be available for photosynthesis which can result in other parts of the plant dying off too.

The plant will try to compensate for this by moving sugars from other parts of its body into the damaged areas, but eventually, it will run out of resources and die.

If only some leaves are affected, then the plant may survive if it can repair those leaves before they become too weak to support themselves or prevent further damage from occurring.

Acid Rain Is A Serious Problem With Disastrous Effects

It has a deteriorating effect on buildings, sculptures, and paintings. It destroys the water supply and causes erosion of the landscape. Acid rain also impacts animals like fish and trees as well as our crops.

Where does acid rain come from? The chemical reaction between sulphur dioxide in the air and water vapour creates acid rain.

Sulphur Dioxide is produced by burning fossil fuels such as coal, oil and natural gas. When the sulphur dioxide mixes with water vapour in the atmosphere it forms sulfuric acid which falls to earth as acid rain.

The amount of sulphur dioxide produced depends on how much fossil fuel is burned by industries or power plants.

Acid rain can cause damage to buildings by corroding metal surfaces such as roofs and gutters, sidewalks, statues, and monuments made of iron or limestone.

Acid rain can also damage statues made of marble or limestone because it dissolves calcium carbonate from these materials leaving holes behind where the minerals once were.

Acid rain causes problems for our water supply as well since it dissolves metals like aluminium, iron, manganese and zinc from soil particles which are carried into streams and lakes.

Acid rain is extremely damaging to the environment, and people need to understand what happens when it falls.

The damage acid rain does to the environment depends on the pH level of the water. When there is too much acid in a body of water, it can cause many problems.

When acid rain falls, it can add to pollution in rivers or lakes. The acidity can kill fish and other creatures that live in these bodies of water. The acidity also affects plant life by making it more difficult for them to grow. Acidic water can also leach nutrients from soil and plants, causing them to die off as well.

Acid rain also affects human health if people come into contact with it often enough, especially if they live near industry areas where there are high levels of pollution. Acid rain can cause respiratory problems for those who suffer from asthma or allergies, as well as damage their eyesight by affecting their corneas.

Acid rain, often caused by pollution and the burning of fossil fuels, significantly harms both the environment and ecosystem causing major harm to life.

Above are just a few examples of the damage that acid rain can cause to the environment. While it may not be as destructive as other types of pollution, it is still important to do your part to reduce the environmental harm it causes.

So remember in the future to be more aware of what kind of emissions you are putting into our world’s atmosphere, and try to bring about a change for the better.